The Books of Mrs. Pauline Steele

A few months ago, I posted a blog about Mrs. Pauline Steele, who was my favorite teacher at Jefferson Elementary School in Fayetteville, Arkansas. She later became a counselor at Woodland Junior High School. In addition to her work in education, Mr. Steele was also a Assembly of God Church minister. My posting about her is located at this link:
http://www.eclecticatbest.com/2011/09/pauline-davis-steele-fayetteville.html

In this post, I wanted to add a bit more about her writing. The best I can tell, Mrs. Steele published three books, two non-fiction and one fiction.  Also, she wrote poetry that was recited on some occasions at events in Northwest Arkansas. Her poetry was mentioned by Fred Starr in one of his columns. I have not found any of poetry that she published.

Her two non-fiction books were 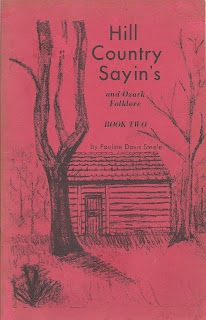 Both are paperbacks in a large pamphlet form. They include definitions of some common words and phrases used in the Ozarks, plus some rarer words and sayings, including these:

The book includes several recipes (e.g. vinegar pie), folk beliefs and folklore (for example, when to take a bath), and brief stories about her brothers, parents, and her life growing up in West Folk. Though parts of these two books do not tell readers anything they don't already know, the other parts are juicy bits of information about life in the Ozarks.

Mrs. Steele's fiction book is titled The Branded Oak: A Tale of the Ozarks. The cover states that the author is "Paul Steele." The book was published by the Hutcheson Press (in West Fork, Arkansas). No publication date is given, but it  probably was published in the early 1970s. 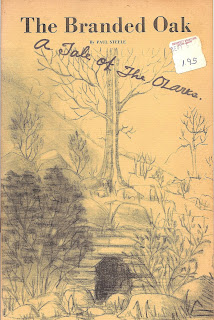 On the back page, the author "Paul Steele" is revealed as Pauline Steele, and this short biography is provided:

Pauline Steele (Branded Oak author "Paul Steele"), native born Ozarkian and proud of it, received her education at the University of Arkansas. She is a B.S.E. English major, has an M.S. Childhood Development, has done graduate work in counseling, and is a former counselor in Woodland Junior High School, Fayetteville, Ark. She is a member of Delta Kappa Gamma Society.

Pauline has followed two successful careers simultaneously, being an ordained minister and public school teacher. Her work is the religious field has complimented [sic] her understanding of the teaching field.

Being the only girl in a family of five children and as the youngest, she has soaked up her surroundings and has always had an ardent wish to write about them. May that inward current of creativity that has dogged her tracks through her busy life have time to express itself in more studies like The Branded Oak.


The story centers on the interest of two young boys -- probably about twelve years old -- who think something is fishy about two women who bought "the Old Hughes Place" -- rumored to be haunted -- near their farms. The two boys -- Chip and his best friend Kenneth Kee -- live on farms near each other, just a short distance from Beaver Lake. They observe some strange things about the behavior of these two weird-acting women, Sadie and Sally. Among other things, these women do not want to join in community activities and they don't go to the local church. Also, they spend too much of their time on a boat on Beaver Lake. In addition, they walk and act funny.

The uplifting story includes a fun loving grandpa, understanding parents, and a school that Chip enjoys. In the end, despite the fact that the grownups don't seem too concerned about Sadie and Sally, Chip and Kenneth end up -- at their peril -- proving they were right to be suspicious of them. Perhaps giving away some of the plot, I will say that some drug running on Beaver Lake was involved, as was some cross dressing.

One element of the plot involves the University of Arkansas playing the University of Georgia in the Sugar Bowl, which occurred in 1969. So, the story must have been written sometime after the end of 1969, when the game took place.

The story was clearly written for an early teenage audience by a person who had been both a school teacher and minister. It is a quick, fun visit to an upbeat world in the Ozarks.

As with her work as an educator and minister, we have to admire the warmth, intelligence, and kindness that can be found in her books and to appreciate her accomplishments.
Posted by Dan Durning at 12:19 PM