Spanish Songs in the Basement of Vienna's Mozarthaus

A friend sent an email telling me that a free concert was being held on Wednesday (April 4) at the Bösendorfer Room of the Mozart House, featuring Spanish songs for voice, piano, and guitar. Three things about the concert interested me:  First, it was in a venue that I had never seen. Second, it promised music with which I am unacquainted. Third, it was free. I decided to go.

The concert announcement described it was a “Galaconcert” that was the conclusion of a Master Course for Spanish songs and music. The brochure for this Master Course can be found at this site: http://www.tinteschuermann.org/ism/DOCS/Poster_CEV_black.pdf

Dr. Helen Tintes-Shürmann (mezzo-soprano), an experienced opera singer who now teaches at the Vienna Conservatory and heads the International Spanish Music Center. [http://tinteschuermann.org/ism/ ] She has held master courses on Spanish song in the United States and China, as well as Vienna. Born in North Dakoka, she has a Doctor of Music from Northwestern University. She started her study of Spanish music as a pianist at Minnesota State University.  http://tinteschuermann.org/biography/


Alejandro Picó-Leonis (pianist), who was born in Spain and completed his music education with an MA from Hunter College of CUNY. In 2002, he made his debut at Carnegie Hall and has played at other prestigious venue throughout the world, including Vienna. He has recorded several CDs. Some of his music can be heard at this site: http://www.picoleonis.com/

Jonas Skielboe (guitarist), who was born in Denmark. He has studied guitar with several European masters and now plays professionally throughout Europe. He specializes in the music of Spain and Latin America. See http://jonasskielboe.com/web/Home.html

The concert was performed largely by four women who attended the master class, plus one young pianist. They were accompanied during the first half of the concert by Skielboe on guitar and during the second half by Picó-Leonis on piano (a Bösendorfer).  The concert also had guest appearances by Dr. Tintes-Schürmann and baritone David Robinson, an opera singer and professor from Texas.

The Bösendorfer Room provided an intimate setting for the concert. It is located in the deep basement of the Mozart House, which is a five-story building constructed in the eighteenth century.  The building’s name comes from fact that it contains the only Vienna apartment in which Mozart lived that still exists. He had a large apartment in this building, which is a few steps from Stephenskirche, from 1784 to 1787. The first three floors of the building are now part of a Mozart museum. See more about the Mozarthaus at http://www.mozarthausvienna.at/en/ 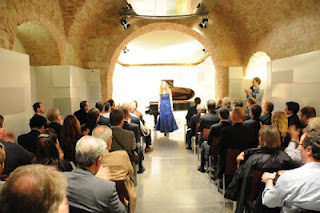 Bösendorfer Room in the Mozart House

The music venue is located in a deep vaulted basement constructed of brick.  It resembles many of the old Vienna Wine Cellars spread throughout the city. This large cellar has been nicely retrofitted to provide an attractive stage and good acoustics. It has seating for about seventy people. See http://www.boesendorfer.com/en/bosendorferhall.html

The Master Course students were an international group. Their short bios, plus information about each of them on the internet, showed that three of the singers have professional careers with some noteworthy training, impressive accomplishments, and good experience. One of them, Maha Marrawi (mezzo-soprana) is a tousled redhead who was born in Syria. She earned a masters degree at Kunstuniversität Graz and has performed in several operas, including Franz von Suppés “Fatiniza.” This opera was recorded and released as a CD.

Two Austrian women, Manuela Leonhartsberger (mezzo-soprana) and Karin Wolf-Bauer (sopran) also are experienced as singers in festivals, concerts, and other events. Leonhartsberger sings at the Vienna Volkopera. This year she is singing the roles of Mercedes in Carmen and Kate Pinkerton in Madame Butterfly.  For more information about these two singers, see these sites: http://www.volksoper.at/Content.Node2/home/ensemble/17085135.php , https://www.facebook.com/manuela.leonhartsberger , and http://www.schubertsolisten.at/karin-biographie.htm .

The fourth singer, Stephany Peña, from Miami, was a bit younger than the other three. In her early 20s, she is studying solo voice at the Vienna Conservatoriun and has experience singing at venues in the United States, Columbia, and Austria. In Fall 2012, she will be in the Choir of the Vienna State Opera during its tour of Japan.

All four of these singers had some very nice moments in this concert, displaying high quality voices and engaging personalities. It was a pleasure to be hearing them sing in a smaller venue, which, of course, is a wholly difference experience than sitting in the Konzerthaus or Musikverein. In these settings, somehow, the vulnerability of the singers and the complexity of their art are more apparent. Here, singing is not a technical exercise by a distance person, but an individual effort that depends on talent, personality, discipline, and training.

The young pianist, Edwin Zúniga Flores, merits special attention. He is fifteen years old, but has been performing since he was six. He came to Vienna when he was eight and has been studying, playing, and composing since then. His fluent playing of a lyrical excerpt from “La boda de Luis Alonso” by Gerónimo Giménez (1823-1894) was one of the highlights of the evening. This stoic young man seems to have the makings of a major talent.

With the lack of wide-spread knowledge of Spanish composers and their music, the work of the International Spanish Music Center to train singers and other musicians to perform this music seems to be valuable. I appreciated the enjoyable evening of Spanish music provided through this Master Class and wish it – and all of the performers at the concert – good fortune in the future. I hope that through their efforts the music they sang becomes more widely appreciated and performed.
Posted by Dan Durning at 12:16 AM No comments: