Writings of a Physician and Freethinker in Franklin County, Arkansas: 1870-1903

I recently finished reading the following book, published in 2013 by the University of Arkansas Press:

. University of Arkansas Press, 2013.  (Foreword by Thomas A. Bruce and an Afterword by Jonathan Wolfe).

The book is an unusual slice of Arkansas history that should be especially interesting for folks with connections to Franklin County and the Arkansas River Valley. The following is a  review of it.
************************** 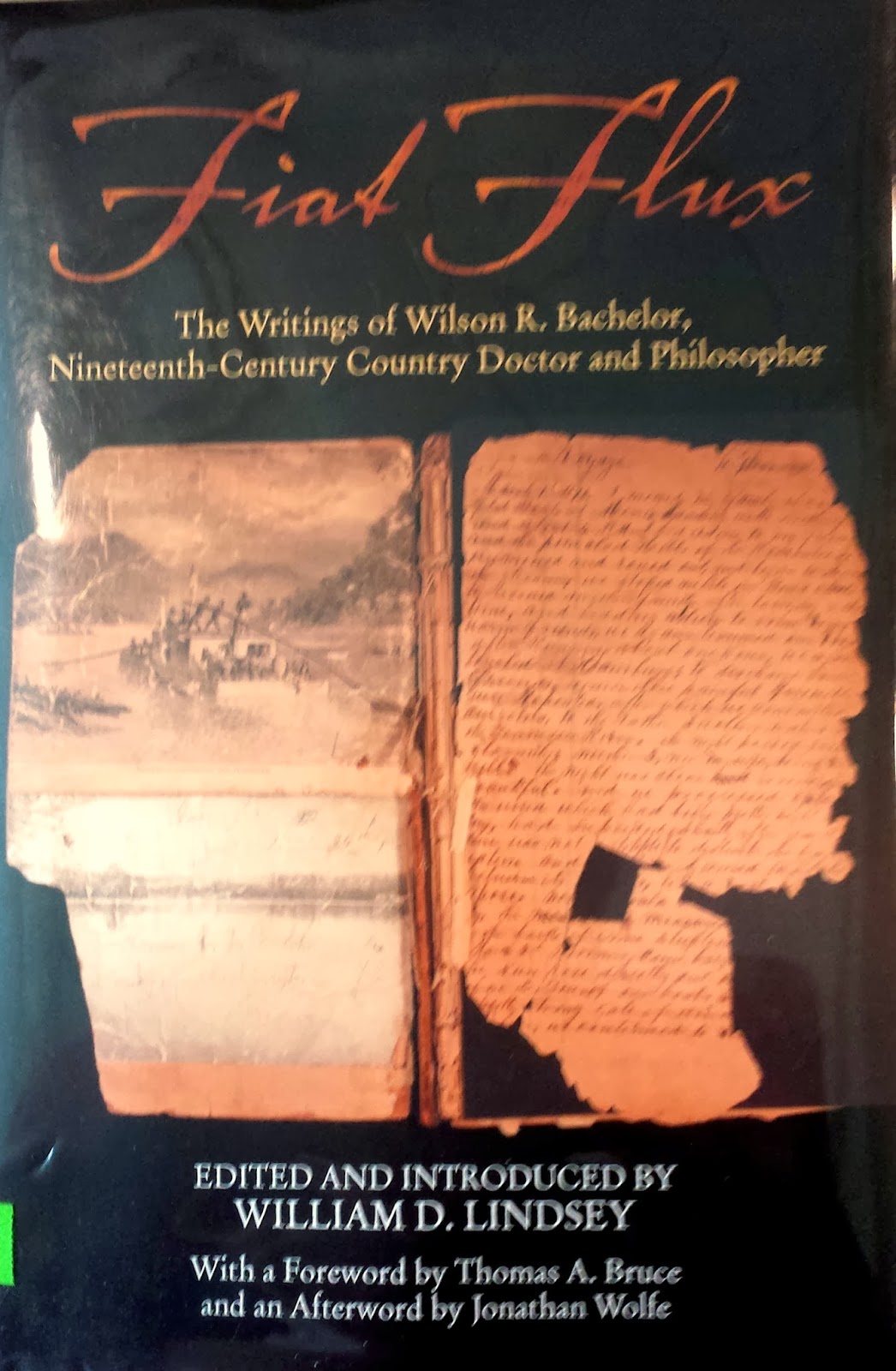 The core of this book is the diary of Wilson R. Bachelor, plus his newspaper essays and letters to the editor, personal letters, and other materials written during his years in Franklin County, Arkansas, from March 1870 until his death in 1903. The diary starts on March 1, 1870, when he departed from his home in Hardin County, Tennessee, for the trip to his new home in the Arkansas River Valley near Ozark. The trip took 22 days as he traveled by water up the Tennessee River to Cairo, Ill., where he caught a boat going south on the Mississippi River. When the Mississippi reached the mouth of the Arkansas River, he boarded another boat to take him to Ozark.

Bachelor was 43 when he arrived in Arkansas. He had been born in 1827 in Tennessee. His parents had moved there from North Carolina, where his father had served in the N.C. militia in the War of 1812. The family first settled in Maury County in the middle of the state; in 1830 it moved to Hardin County, a rural area by the intersection of the Mississippi, Alabama, and Tennessee borders.  The family’s migration path – N.C. to Tennessee to Arkansas – was a common one. As noted in the introduction, “There was a developing tide of emigration from North Carolina to Tennessee, where North Carolina had been awarding land for Revolutionary Service, thereby spurring the movement of families from the mother state to its daughter.” (p. 10). Also, people became anxious to leave eastern North Carolina because the land there was wearing out from the prolonged production of tobacco.

During his years in Hardin County, W.R. Bachelor taught school and became a medical doctor.  However, times became difficult when the Civil War came. He and his family – as well as a majority of people in this rural county – were, at first, union supporters. However, the sentiment of the population shifted when the bloody battle of Shiloh (also known as Pittsburg Landing) was fought in the county in 1862. In 1863, because of the unpopularity of his views, Bachelor and his family moved to Kentucky to escape the confederacy.

Bachelor returned to his home in Hardin County after the war. He was appointed physician in charge of the construction of the Pittsburg Landing National Cemetery but was embroiled in charges that only Union soldiers were being disinterred for reburial. Hard anti-union feelings remained in the county after the war, and those likely contributed to his decision to depart for Arkansas.

When Bachelor made it to Arkansas, he disembarked at Ozark and settled at the foot of “Mill Creek Mountain” on the South side of the Arkansas River. He lived in the community of “Pauline,” which long ago disappeared from maps.  He was less than ten miles from Ozark, which lay on the North side of the river. Bachelor made his living as a medical doctor and farmer. In his spare time, he was a “freethinker” activist. According to William Lindsey, the editor of this volume, Bachelor likely came to Franklin County because it was “in an area of Arkansas with the strongest Republican presence and situated, as well, in the area that had had the most pronounced resistance to secession.” (p. 28)

Bachelor’s diary, especially, the part from 1870 to 1874, is a treasure for historians interested in the practice of medicine in the state. He wrote often about the cases he encountered and his treatment of them. Also, this part of the diary makes clear some of the difficulties of life in Franklin County during this time. He was appalled by the violence he saw in the county, as shown in the following diary entry:

…I thought I would [r]ecord Some circumstances that have occurred [d]uring the last 8 weeks.

[9] or 10 weeks ago two young men hardly [g]rown had a little difficulty, drew their pistols, and commenced fireing on each other, and continued fireing until they both sunk, down and both expired almost Simultaneously, in a few minutes. This occurred at the little village of Charleston 10 miles from where I reside.

About three weeks ago, three men were arrested [n]ear Roseville, they were carried to Roseville [a]nd confined, but before they had any [tr]ial, a mob of men arrive on the spot and [to]ok them out and hung them dead. These men had been accused of robbing and [s]tealing.

[A]bout two weeks ago a young man went to [a] School house, or near one, meeting the pupils [g]oing home, he attacked a youth, a pupil [s]lapping him and using him roughly and [as] Soon as the youth resisted, he drew his [re]peater and Shot him. The pupil lived [a] few days and died.

I am now treating a young man, whose [sk]ull is horribly fractured, this was done[e by] his brother a few days ago at his Fathers, [a]nd in the midst of the family.

{B]ut these are only a few isolated cases. [Th]ere is not a week, but the reports of bl[ood]shed and murder reaches us.

And the perpetrators of these acts, go unp[unished]. If any of these desperados are arrested, [they] almost invariably make their escape, [and] if they do not, they are Seldom punis[hed]. Since the first of January 1874 until to[day] the number of men who have died by vio[lence] equal those, who have died of disease in my [practice].  It is nothing uncommon here, if Some o[f a] man[‘s] neighbors become offended at hi[m], to go in a crowd to his house and order him to leave in a given time, which [demand?] is implicitly obeyed.

Every person here are allowed to carry weapons. So every desperado and hairbrained you[th] in the country has them Swung to his Sid[e]. They go to Church with them, they do into a Gentleman’s house, with them and think [it] an honor. (p 69; spelling and punctuation as in the original; omitted and unreadable letters are in parentheses)

His diary entries that resumed in 1890 after none had been written for about sixteen years are less about medicine than his life and beliefs. In the entry dated December 25, 1890, the first since December 24, 1874, Bachelor proclaimed he had become a confirmed “Freethinker or Agnostic.” (p 72). Much of his writings for newspapers and other publications espoused his opinions. For example, he provided his thoughts about religion in a three-part essay, published in a local paper [undated], with the title, “Reasons for Being an Agnostic.”

As a freethinker, Bachelor believed that human affairs should be guided by reason and empirical thought. He was a social progressive, and as his essays and letters published in local newspapers showed, he was for women’s rights and opposed the death penalty and prohibition.  He wrote to one friend, “I freely adopt what two of the pioneers of free thought have said: ‘The world is my country, to do good, my religion. The place to be happy is here, the time to be happy is now, the way to be happy is to make others happy.’” (p. 153)

The title of the book, Fiat Flux, is the title of a monograph or brochure that Bachelor wrote in 1884 that “disputed the divinity and authority of the Bible.” As a result of the publication, he was expelled from the Masons by the Lowe’s Creek Lodge No. 346, which he had helped found.

With his views, Bachelor became “one of the leading Liberalists in Western Arkansas.” He was also among the leading Republicans in the area.

I am sure that Bachelor’s opinions were not very popular in Franklin County and its vicinity. In fact, if my own ancestors, the Durnings, heard them, they probably thought they were the work of the Devil. Lewis Durning and his family had made the same move from North Carolina (Orange County) to Tennessee to Arkansas, arriving in Franklin County in the 1840s. They settled in Cass, located in the mountainous northern part of the county. They were living there when Bachelor arrived and were there when he died.

During the time covered in Bachelor’s writings, the Durnings were eking out a living near the Mulberry River, about thirty miles from where he had his home. They were primitive Baptists. In the 1840s, Lewis and his wife Nancy and son George helped found the New Enon Primitive Baptist Church in Cass. Certainly, they, like most of the residents of Franklin County at the time, were not freethinkers and, from available evidence, were unlikely to have read Bachelor’s essays because they could not read or write. [See Walter Harris, Short Stories by a Pioneer Teacher, Walter C. Harris, Bella Vista Press, 1964, pp 85-89]

The fact that my ancestors shared a county with Bachelor made this book more engaging to me than it otherwise would have been, but such a connection is not needed to appreciate and enjoy it.  Enormous effort was required to track down, assemble and prepare the Bachelor writings for publication. The writings are heavily documented (over 100 pages of footnotes), and the documentation greatly enhances an understanding of the context of Bachelor’s work and philosophy.

In all, this book is a valuable and remarkable excursion into the life and mind of an interesting man living in the Arkansas River Valley, on the edge of the Ozarks, in the post-Civil War period.  In learning his story through these annotated primary documents, we get another perspective of how people in Franklin County lived and the health care they received in the last part of the 19th century. Reading this book, we add additional texture to the history of this time and place in Arkansas.

The book has an excellent introductory essay by William Lindsey, the book’s editor, and another informative essay, “Medicine in the Arkansas River Valley, 1865-1890,” by Jonathan Wolfe. The annotations are well done. I thoroughly enjoyed the book and recommend it to anyone interested in learning some new wrinkles in Arkansas history.