Note:  I just downloaded this story. It sounds as if the Birch Bay campus is in turmoil.

(Campus Executive News Reporting Service, May 19, 2014)  Several student and faculty groups expressed outrage on Monday that the University of Birch Bay invited Alexandr Alexandrovich Sasha, a Russian humanitarian and businessman, to speak at its Spring commencement. The Student Society for Democracy (SSD) organized two demonstrations on Karl Leibknecht Square in the center of the campus. Also, the campus libertarian group, Hands Off Me, A**h***s (HOMA) has set up a table by the campus’s John Galt Memorial Fountain where students can sign a petition against Mr. Sasha. 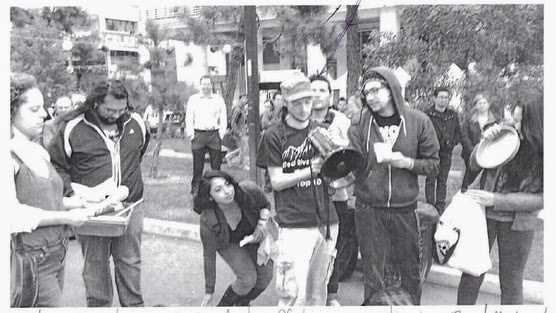 Anita Asperan, SSD spokesperson, told reporters that the invitation to AAS was an insult, “an affront to all progressive students and faculty members.” She continued, “The guy runs a coal mine, for heaven’s sake. And coal is causing the slow destruction of the world’s environment. And our administration expects us to listen to this guy? Hell, no!” She said the group may boycott the commencement if Mr. Sasha speaks.

Jolly Friedman, a member of the HOMA  group, stressing that she does not speak for other members, pointed out that Mr. Sasha is a member of Russia’s Duma where he has voted for all kinds of share-the-wealth policies. She said, “The Russian government steals money from its value creators to give to people who don’t want to work. I mean, free health care, mostly free education, and free government money when you retire at age 55. That’s like Communism. Students shouldn’t have to listen to this collectivist.”

Several faculty members are also upset with the selection of Mr. Sasha as commencement speaker. Forty-five tenured faculty members of the UBB’s Sociology Department, and three tenured political science professors, have signed a letter to the UBB president demanding that the invitation issued to Mr. Sasha be rescinded. Also, they threatened to boycott the ceremony unless the speaker is changed.

Professor Friedrich Sheu (Ph.D., Univ. of Calif., 1969), chair of the Sociology Department, said the invitation to Mr. Sasha should be withdrawn immediately.  Prof. Sheu told reporters, “This guy is an atrocity. He exploits his poor mine workers to make billions. Such a monster does not belong on this campus.”  Prof. Sheu promised to bring the matter before a special session of the faculty senate. He said, “I know that is a pretty d***ed dramatic action, but it must be done!”
Mr. Sasha, the man at the center of the controversy, is a self-made billionaire who began his life in a family of poor factory workers in Orenburg, Russia. He now owns the Alexandr Alexandrovich Sasha Coal Mines near Mezhdurechensk and is high on the Forbes 500 the list of Russia’s wealthiest oligarchs.  Mr. Sasha, who has a second home in Vancouver, is a member of the leadership of the Russian Duma and has won frequent awards for his service to humankind and his encouragement of education. He has a son studying at Harvard and a daughter at London School of Economics, from which he has an honorary degree.

Opposition to Mr. Sasha’s graduation speech has upset some students and faculty.  Dudley Evermore, an MBA student from Seattle, objected to actions to limit freedom of speech on the campus. He told a reporter, “I want to hear the guy. He’s made billions and earned the right to speak.  What are the protesters afraid of?  That some success may rub off on them? Bunch of losers.”

Many faculty members in the Schools of Business, Engineering, and Poultry Science have signed petitions asked the UBB president to uphold freedom of speech on the campus.  Ranier Rainright (Ph.D. Liberty College, 1984), an economist who teaches ethics in the School of Business, said in an interview that he had heard from his pastor that Mr. Sasha was a devout member of the Orthodox Church whose message could be valuable for graduating students. He said, “I am so tired of this “Political Correctness” crap.  Why can’t a good Christian speak on this campus without the crazies waving their hands and screaming their hatred of all that is right and Holy?”

Mr. Sasha, who recently provided a large donation to the University of Birch Bay to support the construction of a new basketball arena seating 15,000 spectators, was not available for comment.
The groups supporting and opposing Mr. Sasha’s speech at the UBB graduation are planning to conduct rallies and petition drives all this week.  Graduation is scheduled for June 28th.  It will be held at the University of Birch Bay Stadium by the Bay. Each graduating student is entitled to five free tickets, which must be picked up by June 20th.  Other tickets can be purchased from the UBB website for $15 each.