Circumstances have made it impossible for me to spend much time at my home in Birch Bay, WA during July and August, and that was especially disappointing because my Godson – the twelve-year-old dynamo from Podolsk (Moscow Oblast, Russia) – arrived on July 5 for his annual visit. The trip to Birch Bay, with his mother Oxana, was fifth time that Danielka Kalmykov (also known as Ka-Boy “the majestic and the powerful”) has traveled there to spend much of the summer.

When it became clear that I would not be in Birch Bay most of time when Ka-Boy and his mother were there, Danielka’s Godmother and aunt, Natalia, proposed that he, his mother, and she travel to Arkansas and stay a week in Fayetteville, where I am presently required to be. I thought that was a great idea, and the trip was on. I flew from Fayetteville to Birch Bay, where my Subaru was sitting; then the four of us drove for 32 hours to get to Fayetteville.

The four days on the road first took us through the noteworthy scenery of Washington, Idaho, Montana, and Wyoming.  We poked through these states, enjoying the views and vowing to return for longer stays at different cities and sites.  During this part of the trip, Natalia and Oxana, denizens of the back seat, kept pointing out buffaloes and elk; Danielka and I responded with proper skepticism and scorn. We, in turn, kindly pointed out the grazing unicorns and dragons along the way.
Danielka claimed the shotgun seat with some vehemence. He pointed out that during the past five years or so, he had been forced to sit in the back seat. Now that he has reached 12, and of course his soul is 14 years old, it was his turn to sit in the front. The main problem with him occupying the front passenger seat was that he was not heavy enough for the sensor to know that someone was sitting in the seat. With him sitting there, a light indicated that the seat was empty and the air bag was not on. To solve that problem, every time Danielka got into the car, he carried a heavy box of books with him. When we got the signal that the passenger air bag was on, his mother would take the box and put in the back of the car.

Midway in the trip, we left the mountains to travel the straight roads of South Dakota, Iowa, and Missouri. We sped through these states, and Danielka amused himself by reading the Hunger Games, which he enjoyed.

On one long stretch in South Dakota, Oxana – who recently got her driver’s license in Russia – volunteered to drive. She had never driven before in the U.S. She took the wheel for an hour or so. Not only was she very nervous, the rest of us had white knuckles waiting for the inevitable crash. She did fine, at least until she ran a red light at the exit. Fortunately, we all survived and celebrated by stuffing ourselves at a Denny’s.
After leaving on a Tuesday, we arrived in Fayetteville on Friday, early in the evening. The week that followed was full of fun and firsts for Danielka. They included:

A Sunday concert at the Fayetteville Public Library. It was a surprisingly good concert by a Barrett Baber, Fayetteville singer and songwriter, who also teaches sometimes at Fayetteville High School.  He writes some great songs and is a strong performer, and he has had some recent successes, including an appearance at the 2014 Grammys. His song “Arkansas (Get There from Here)” has been selected for use in advertisements promoting tourism in Arkansas. If you have not heard him, check him out at this site:  http://www.barrettbaber.com/  or on Facebook. He will be performing with the Razorback Band at halftime of the September 20th football game.

First peanut butter and jelly sandwich. Danielka had his first taste of this delicacy at the Eleven Restaurant at the Crystal Bridges Museum. His mother, Oxana, also had her first taste of grits, enjoying the Shrimp and Grits selection. I savored my 3,000th meal of tasty brown beans and cornbread. Natalia was underwhelmed by the High South Chicken Salad. See the Eleven’s lunch menu here:  http://crystalbridges.org/wp-content/uploads/2014/02/Lunch_feb.pdf

First Grapette and Moon Pie.  Later the same day that he enjoyed the pb&j sandwich, Danielka got his first tastes of Grapette (purple, containing “no fruit juice”) and Moon Pies, bought at the store at the entrance of the Walmart “Museum” on the Bentonville square.  He found both to this liking.
First B-B-Q Ribs.  When the four of us stuffed ourselves at Penguin Eds, Danielka ate his first BBQ ribs.  Eating ribs was a homage to his cousin, Denis, Natalia’s son. In late 1996, when Denis arrived in Athens (GA) from Ukraine as an 11 year, he took mightily to ribs, and for months that is all he wanted to eat whenever we went out to a restaurant. Ka-Boy ate the ribs with evident enthusiasm.

First Frosty Mug of A&W Root Beer. After losing (again) some bet with Danielka, I owed him a frosty mug of A&W root beer, which I had assured him had no equal it came to slaking thirst on hot days. Shortly after getting to Fayetteville, I was chagrined to learn that Fayetteville no longer has an A&W drive in or restaurant (though the Sonic drive ins are ubiquitous). Checking the internet, I found that the nearest A&W restaurants are in Fort Smith and Siloam Springs. So the last full day on the visit, we all drove to Siloam Springs to have a large frosted mug of root beer. It did not disappoint.

A trip to Tahlequah, OK to see the Cherokee capital. We took one afternoon to visit Tahlequah. I am not sure that I have ever visited this city, though I vaguely remember playing baseball there in the early ‘60s. I was surprised to find, after a 90 minute drive through Ozark foothills, an attractive downtown and several historic buildings. We devoured tasty pizza at Sam and Ella’s Chicken Palace, which is stuffed with chicken pictures, knick knacks and artifacts (for reviews of this restaurant, see http://www.tripadvisor.com/Restaurant_Review-g106178-d1172904-Reviews-Sam_Ella_s_Chicken_Palace-Tahlequah_Oklahoma.html )  Then we spent a couple of hours at the Cherokee Heritage Center, located a short drive from downtown Tahlequah. There, we learned a little about the history of the Cherokees, and Danielka scored a colorful tee shirt that will be unique among his friends in Podolsk. See http://www.cherokeeheritage.org/

On the way to Tahlequah, we stopped by the Prairie Grove Battlefield State Park for a quick history of the battle and a look at some of the old buildings. (See http://www.arkansasstateparks.com/prairiegrovebattlefield/events/ )
The park seems improved very time I go there.

Daily dog walk. One of the pleasures of Danielka’s visit was a daily morning walk by or near Lake Fayetteville and its trails with my mother’s two dogs, Abby and Peppy (aka Pepsi). Danielka does not have a dog, and has not spent much time with them. He managed to make the dogs his friends through a liberal dispensation of treats.

He and his mother were impressed with the Lake and its trails.  See http://www.accessfayetteville.org/government/parks_and_recreation/documents/maps/Lake%20Fayetteville%20Trail%20website.pdf

Unfortunately, the trips to Lake Fayetteville raised some concerns. On the first day, we spotted a truck near the trails that. we think, was following us to conduct secret surveillance. Every day we went to Lake Fayetteville, the truck was there. The truck, as shown below, apparently belongs to the notorious secret police of the Soviet Union, the KGB. 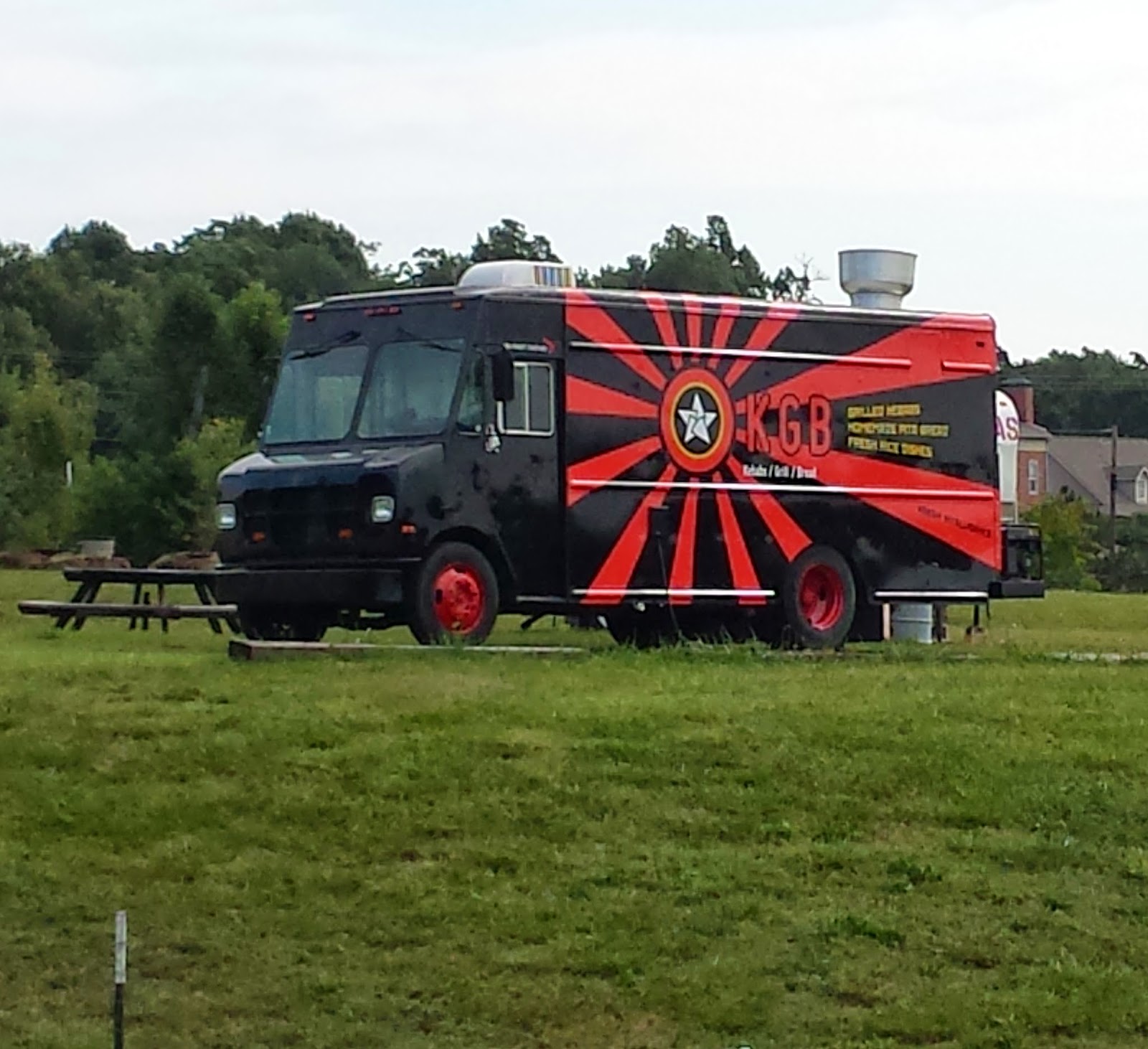 In all, it was a great week in Fayetteville that went by quickly.  Natalia and I appreciated getting the opportunity to see the mind and energy of a robust and happy kid in action. Danielka and Oxana enjoyed their new experiences in the South.
Posted by Dan Durning at 12:07 PM