"Moin," She Said and I Wondered Why

Crossing the hotel lobby in Kiel, I glanced at the receptionist, a neatly dressed young woman with a big smile, who said something that sounded like “moan.”  I replied “Guten Tag” and I scrunched up my face as I left the building, wondering what she meant by that.

A couple of hours later, I returned from a walk to the Kiel Altstadt (old city) and again, as I walked near the reception desk,” the same young woman smiled as she distinctly said “moan.” I smiled back and nodded my head.

After I returned to my room, I thought about the receptionist's greeting and recalled that in Büsum a couple of days earlier, I had seen the words “Moin, Moin” printed on various tourist items such as coffee cups, flags, and caps. Usually the words came with a picture of a smiling seal.  At the time, I had thought that “Moin, Moin” was what Germans hear when seals bark. 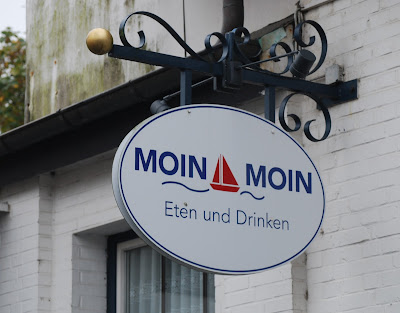 A little later, walking through Büsum, I had been confused when I had seen a sign for a small restaurant that had the words “Moin, Moin” with nary a seal to be seen.  The sign also included the words “Eten” and “Drinken,” which I took to be Plattdeutsch (low German) for “eat” and “drink.” Plattdeutsch is a dialect used in the northern part of Germany, and both Kiel and Büsum are in Schleswig-Holstein, the country’s northern-most state.

Puzzled by the receptionist’s use of the word “Moin”, I decided to look up the meaning of the word. Good ole Wikipedia came to the rescue. It informed me that “Moin” is a “Danish, Frisian, Kashubian and Low German greeting from East Freesia, Southern Schleswig, Bremen, Hamburg, Kiel, Mecklenburg-Vorpommern, the eastern and northern Netherlands and Southern Jutland in Denmark.”  It means “hello” in some places and “goodbye” in others.

Apparently, the greeting is “Moin,” but also sometimes “Moin Moin.” However, Wikipedia warned that many locals think of “Moin Moin” as a usage for for tourists.

Now, I know two things.  First, the receptionist was not suggesting in a not-so-subtle way that I look like a seal; she was simply saying either hello or goodbye.  Second, I have to look up what a “Kashubian” is.

Email ThisBlogThis!Share to TwitterShare to FacebookShare to Pinterest
Labels: Germany