They are all gone: the hole-in-the-wall on Alleestrasse where I ate my first luscious currywurst; the nearby café that usually was blaring “Monday, Monday” by the Momas and Papas as I walked by; the little bakery by city hall where I too often bought a huge nusskranz (wreath-shaped pastry) that should have lasted a week, but disappeared in a day.

Also gone: the ice cream shop under the terrace of Hotel Nordseehalle, across from a finger of the Büsum harbor, were I sold soft ice cream and struggled with my German. And the people I worked for and with at the hotel during the summer of 1966, including my roommates, the members of an Austrian rock band; Fay Franklin, a college student from La Jolla, who cleaned rooms at the hotel; Adriano and Rosa, the kitchen workers from Italy; and the “old bastard” an ill-tempered sea-farer employed by the hotel to order people around.

Yes, the Büsum I knew in 1966 as summer help for the Hotel Nordseehalle is not the same as it was fifty years ago. In late October, I found out during a visit there how much this small town on Germany’s North Sea coast has changed and what remains.


For one thing, the town is not so small any more: its boundaries have expanded and it has many more houses and people crammed into a small area. Among the post-1966 additions to the town are a large, intrusive bath house on the high ocean bank that serves as a seawall against flooding. Even worse is a huge skyscraper built along the ocean a couple of decades ago. It is a monument to bad taste and poor judgement, an ogre looming over this sedate village made up primarily of single family houses.

Even with it changes, I still recognize Büsum. It seems the same in many regards as when I lived there for a couple of months fifty years ago. At low tide, people still walk on a vast expanse of mud to get from the beach to the water. People continue to stroll along the paved trails, stretching for miles, overlooking the North Sea. People still flock to the stores and restaurants on the main street that runs from the railroad station to the North Sea beach. Even on cool late-October days, the resort was packed with people walking here, walking there, eating ice cream, shopping, and dining on fresh fish.

Fortunately, Büsum still has its picturesque harbor with colorful working boats, some going daily to trawl for shrimp and fish, others taking tourists to Helgoland, to see the otters, or just to cruise around the area. For visitors who like fresh shrimp, they can buy them in cone-shaped bags at stands by the harbor. Also, freshly caught fish of all kinds can be purchased at scattered fish stores.

Away from the harbor, I was glad to find, amid all the construction of the past fifty years, some houses from the earlier years of the town. The most interesting ones have roofs made of straw.  Others have tile roofs that are narrow inverted-V shapes. They all are distinctive reminders of the life during the old days of Schleswig-Holstein.
During my three days in Büsum, it was pleasing to revisit many places I remembered from 1966. For example, I lodged at Hotel Nordseehalle, which is still going strong, but seems smaller. It is located by the harbor near the entrance to the North Sea beach, and every morning it serves a tasty breakfast in a second floor room with picture windows providing views of the harbor and the Sea. In 1966, this room was part of a large night club/dinner restaurant area that offered, on most evenings, food, drink, dance, and entertainment by my roommates, the Austrian pop band. Sometime in the past fifty years, most of the night club was converted into guest rooms, leaving only the smaller remaining space as a dining area. In addition to its night club, Hotel Nordseehalle had in 1966 a first-floor restaurant with a large outdoor seating area. I spent my first weeks at the hotel washing dishes in the restaurant’s kitchen. Now, the restaurant serves Chinese food.

Also, I revisited the house in which I lived with other temporary Hotel Nordseehalle staff members. It is located on a side street (Hohenzollernstrasse) off just the main street (Alleestrasse), a short walk from the hotel. In 1966, this street was lined with worn two-story residential buildings. Most of those buildings – including the place where I lived -- have been turned into upscale restaurants.

One other place I remembered from 1966 was a funky restaurant (Zur alten Schlosseri) up the street from Hotel Nordseehalle. This restaurant (whose name may have been different at the time) had an unhappy American female student working as its bartender for the summer. There I had my first taste of real bouillabaisse soup. Obviously, it was a memorable experience, since 50 years later I  recall eating it. The restaurant still has lots of character, but it no longer has bouillabaisse soup on its menu.
After a fifty-year absence, I did not expect to find anyone who had been around Hotel Nordseehalle when I worked there, but I still had a vague hope that it would happen. When I checked in, I casually mentioned that I had worked at the hotel in 1966. The young man at the desk expressed very mild curiosity about that and let it drop. I also said some words about my experience at the hotel to the woman serving breakfast. Again, only mild curiosity.

After these dispiriting encounters, I gave up hope of finding some human link to the past, but as I was checking out, something about the woman at the desk seemed vaguely familiar. So, with nothing to lose, I again mentioned that I had worked for the hotel in 1966. This time I was surprised to find out that the woman had been at the hotel in 1966 and remembered the Americans (Fay and I) working there. She said she had fond memories of buying soft ice cream every day from an American. That was me!

It turned out this woman had not worked at the hotel in 1966; she had been only about ten years old at the time. However, her mother had worked for the hotel, and the girl had lived with her and her father in a small room there. (A little while after talking with this woman, I remembered her mother as the efficient, no-nonsense assistant to the hotel manager. We got along fine.) Finding our connection, we spent some time recalling details of the old days at the hotel and remembered how good the ice cream had tasted during the summer of 1966.

******
For the story of my work at Hotel Nordseehalle in 1966, see this blog entry: http://www.eclecticatbest.com/2011/08/washing-dishes-at-hotel-nordsee-halle.html 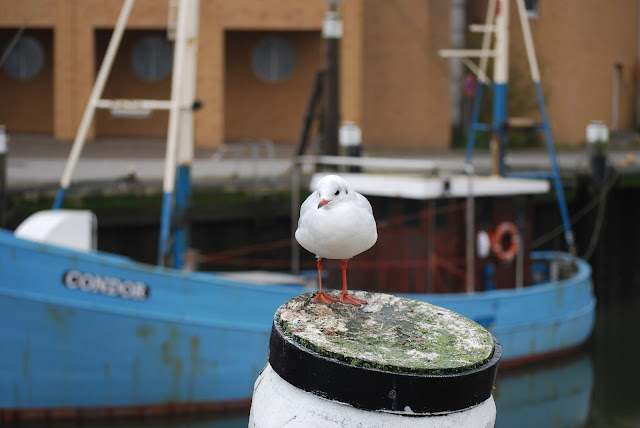