This picture is a deeply sad one. It shows my grandmother and grandfather burying a son, John Lewis Durning, who died at the age of 17 on March 22, 1928. 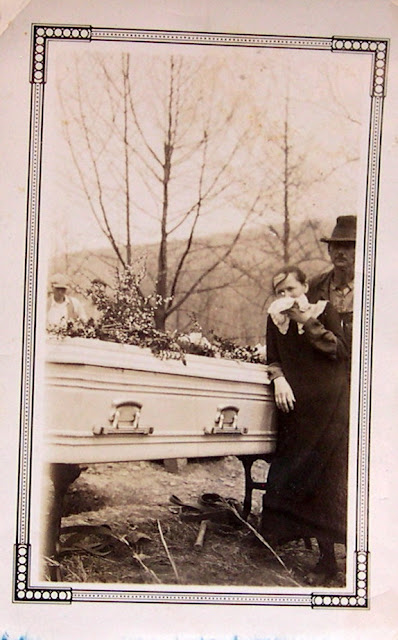 The picture is taken at the Cass cemetery, which is located in the Boston Mountains of rural Franklin County. This cemetery is on the slope of a hill across the highway from an old sawmill. You can see it from the highway; its on the right as you head south and trade the twists and turns of a steep mountain for a flat road. An old Baptist Church used to be nearby -- I don't know if it is still there. Most recently, a Job Corps camp was located near it. And, of course, the mischievous Mulberry River is not too far away, nor is Turner Bend.

This location is usually a beautiful setting, framed by hills covered with thick stands of trees and bordered by a stream feeding into the Mulberry. But it was not beautiful on this day in 1928. The picture shows it was overcast; the hill in the background seems bleak. The nearby bare trees add to the desolation you can see in my grandmother's face and to the stoic grimness of my grandfather. The casket is leaning a bit because the grave was dug on sloping ground.

The casket looks to be a fancy one that had to be carried from Ozark or Fayetteville; neither was an easy trip. Likely the cost of such a nice casket was a burden on the family finances of a hill country farmer.

The grieving woman in the picture had a beautiful name, Lillie Samantha. She was born in Johnson County, Arkansas on January 31, 1889 or 1890 (her tombstone says 1889, her social security record says 1890).  Her parents were Gains Harris and Narcissa Belle [Bowman] Harris.

The Durning picture archives (a big shoe box) has one picture of my grandmother as a young woman.  She looks pretty and sophisticated in it; more like a city girl than a hill farmer's daughter. I have to wonder about the story of the hat. 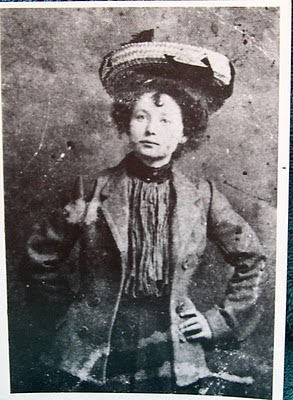 Lillie Samantha [Harris] Durning was a Baptist during the first part of her life, as were the Durnings and lots of folks in the Ozarks. Many years ago, I found some papers in the Franklin County Court House showing that the Durning family -- which had arrived in Cass from Tennessee in the late 1840s -- had donated the land for the Baptist Church located near the cemetery where John Lewis was buried.

My grandmother later became a Jehovah's Witness. An aunt told me that she had left the Baptist Church soon after the death of John Lewis because of her feelings about the unfair loss of her young son. When I knew her -- I thought she was the nicest and kindest person I had ever known -- she was active as a Jehovah's Witness, and the church was an important part of her latter life.

The man in the picture, Elias Nathaniel Durning, was born on April 21, 1882, in Franklin County, Arkansas. He is wearing the hat and overalls of a farmer, plus a nice shirt. He was still wearing the hat, or one like it, and overalls during the 1950s when I visited him. Gruff but playful, my grandfather seemed to be a quiet man; he was not in good health for some time before his death. 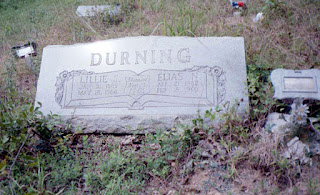 How did Lillie Samantha Harris, born in Johnson County, meet Elias Nathaniel Durning of Cass? It likely came about because she moved with her parents to Franklin County sometime after the turn of the century. The 1900 census showed them living in Newton County; the 1910 showed her parents were living in Wallace Township of Franklin County; it also showed Lillie S., aged 20, was married to Elias N. and they had two small children and an infant. They married on November 25, 1905.

In 1920, Lillie and Elias Durning were still living in Cass and had seven children; the youngest was one year old. In 1930, they had five sons and five daughters living with them in Hogan Township of Franklin County (near Denning and Altus). Plus one son in the Cass cemetery. By then, the family had moved away from Cass to the southern part of the county. 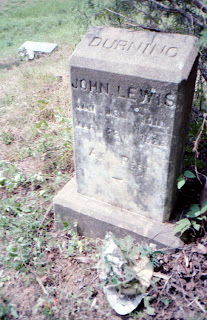 Both of my grandparents lived into their 70s, with the later years of their life spent in Fayetteville. My grandfather died in February 1960.  My grandmother died in May 1964.  Both are buried in the Cass Cemetery where they left their son on a sad March day in 1928.
Posted by Dan Durning at 9:31 PM