Public art is often like Muzak: it exists but you hardly notice. It’s bland, easy to ignore, and forgettable. Personally, I prefer public art that demands attention because it is startling, provocative, or even shocking. It also helps if such art exhibits some beauty even if it is an enigmatic sort.

Gobsmacking public art in the United States is found mostly in larger coastal and university cities where a good portion on the citizenry is open minded and not offended by things that are “different.”  Medium and smaller cities are less likely to spend money on, or give their imprimatur to, unusual art that would challenge, maybe even offend, local citizens who would decry spending THEIR TAX DOLLARS! on any art that did not include a cross; depict Jesus, a saint, or a hero; or contain an accurate representation of a pleasant aspect of reality. While, most public art is bought with private funds, its location in public areas nonetheless gives each citizen the right to complain.
When I was living in Little Rock in the 1970s, a controversy arose over a sculpture bought by a quasi-public organization and placed in a very public location. It was 1978, and the Metrocenter Development District was trying to revitalize the downtown. It got authorization to create a pedestrian zone and to place an important piece of art at its center, Main and Capitol Streets. Following the advice of advising experts, it bought (with funds coming from a property tax on businesses in the district) a large abstract sculpture by the renown Henry Moore. It was titled, “Large Standing Figure: Knife Edge.” The cost was $185,000. For more on the installation of the Henry Moore sculpture in Little Rock see these links: http://www.encyclopediaofarkansas.net/encyclopedia/entry-detail.aspx?search=1&entryID=2131 and https://littlerocklove.wordpress.com/2012/08/10/a-silent-sentinal/

A hullabaloo followed, with a flow of complaints about the sculpture; some people complained that it did not look like anything. “What is it?” they would ask. Also some folks complained about its cost, ridiculing the idiots who made the decision to spend a vast amount of money on such trash, even though general taxpayers did not pitch in a penny. Others suggested the art was, at best, a symbol of the folly of over-educated liberals and, and worst, of the decline and fall of civilization.

When the pedestrian zone was abolished in 1999, the sculpture was moved a couple of blocks to an empty patch in front of a bank. In April of this year, the city of Little Rock acquired it in return for a piece of downtown land. The city will move it to the renovated Arkansas Art Center. The assessed value of the sculpture is about $5 million.

I encountered another example of scorned public art when I was living in Athens, Georgia. One day I was driving on a rural road south of Watkinsville, which is a short drive from Athens, when a colleague in the car yelled at me to look to the left. There in a corn field, about 150 yards from the road, was a large stylized statue of a horse (named Iron Horse, or Pegasus without Wings). My colleague then told me the story of how in 1954 the sculpture had been installed on the University of Georgia campus, but many students hated it. After it had been vandalized a few times, the head of the art school had it secretly loaded on a truck one night and taken it to the farm of a man who was happy to host it on his land. The statue, owned by UGA, is still there, but now the university also owns the land that it uses as an experimental farm.
Fortunately, despite resistance to it, Gobsmacking public art can be found diverse places throughout the world, including some medium and smaller cities scattered throughout Europe. I was reminded of that when I traveled to Vigo, a city of about 300,000 people located on the Atlantic coast of Spain. I knew also nothing about the city before I arrived there in May, and chose it mainly because it was a convenient stop after a long train trip through the mountains from Burgos.

I quickly started enjoying my visit to the city, in large part due to views of its mountainous residential areas sliding down to the beautiful waterfront, but also because of its public art. Much of the waterfront is a working port with cranes and warehouses, but after walking down the hill from my hotel, I saw the beginning of a long park and walked toward it. As I got closer, I spotted something that caused me to blurt, “What the ….” It was a sculpture of a swimmer taking laps in the concrete. It definitely came from the School of Gobsmacking Art.

Walking down further the promenade along the waterfront, it did not take me long to get to another strange site. It was a statue of a man, Jules Verne, that seemed quite conventional until you noticed that he was sitting on a huge squid. Unconventional and surprising, I was delighted to see it. The statue subject is Jules Verne, whose book Twenty Thousand Leagues Under the Sea, was set in Vigo Bay. If you want to know about the squid, view this link https://www.youtube.com/watch?v=Xhyuey4xU3Q
Walking a few more minutes on the promenade, I came to a plaza in front of a waterfront shopping center that is adjacent to the city’s port, where a gigantic cruise ship was moored. As passengers departed from the ship and walked onto the plaza, they had a surprise in front of them: a large sculpture of the head of a woman (or maybe its a man) whose face has smacked the ground. I thought its name should be “faceplant,” but it turns out to be “Leap.” It was created by Francisco Leiro, a Galician born in 1945. He is the artist who sculpted the Swimmer that I saw earlier. The faceplant piece certainly attracted the attention of the disembarking passengers. After first examining the sculpture myself, I found a nearby place to sit to watch the reactions of people when they first walked by it. 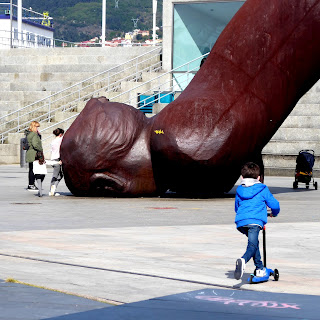 Going up the hill from the port area, through a nicely maintained Old City that gives a taste of Vigo as it looked a century ago, I came to the most bizarre of the city’s public art. It located in a small square next to one of the city’s busiest streets. It is also the creation of Leiro, his most audacious. This sculpture is mounted on high double columns. Its name is “Merman.” The name explains the scales on the man’s chest, the conventional face, and the strange body. For an interesting discussion of the statute, go to this link: https://littlerocklove.wordpress.com/2012/08/10/a-silent-sentinal/ The "merman" sculpture is another piece of Vigo’s art that will be hard to forget. It definitely would not be a hit in Little Rock or Athens, Ga. 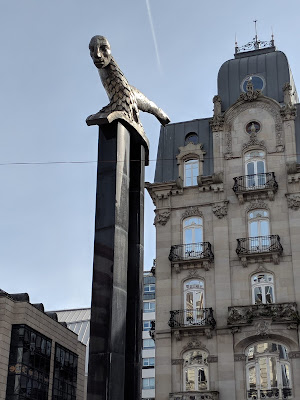 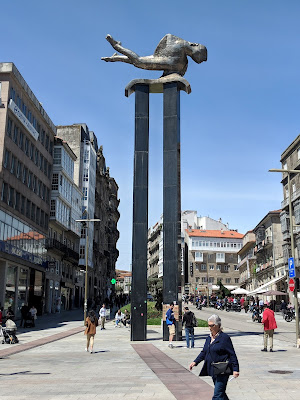 I have to say that Vigo’s public art certainly enlivened my strolls around the city. While I was most attracted to the Gobsmacking public art, I also enjoyed some of the more conventional art, such as a pair of statues near the shoreline facing each other. One depicted a fisherman returning from the sea carrying some fish, the other his family awaiting his return. These sculptures are touching in a familiar way.

With its numerous and diverse pieces of art scattered throughout the city, thanks is owed to Vigo for creating a stimulating experience for strollers. Viva Vigo and its taste in public art!