Every so often the topic of playing Little League baseball during the good old days (the last half of the ‘50’s) pops up on Facebook, stimulated by the post of a team picture or the mention of a name. It is of interest, of course, only to folks who were on one of the Fayetteville teams in those years or who know someone who was.

In talking about the good old Little League days, the conversation usually turns to recollections of some of the memorable boys we played against. There was Justin Daniel, the man among children, who hit home runs not only over the fence, but also over the road behind the fence, endangering the windows of a distance apartment building. His fastball, thrown from a mound only 46 feet from the plate, lived in the nightmares of more than a few of us who had to bat against him and feared for our lives. Then there was Lloyd Wolf, a short, freckled, thick left-hand hitter famous for regularly hitting balls into the City Park swimming pool behind the right-field fence. Like him, Charlie Jordan, a raw country southpaw with a mighty swing, also deposited quite a few balls into the water. (These boys must have made the adults who ran the league cringe; two new baseballs were allotted to each game, and they were no good when soaked.)

Among the pantheon of remarkable players from 1956 to 1959 was a boy named Richard Quackenbush, who impressed with both his strong arm and his hitting power. When his name arises and his athletic ability is discussed, there inevitably follows a statement like, “I wondered what happened with him.” We don’t know because he moved away from Fayetteville with him family before the 1959 season, when he would have been twelve years old (at the time, Little League players were between the ages or 8 and 12.) When he left, most of us lost touch with him, given our youth and the comparatively primitive avenues of communications at the time.

Curious about where Richard and his family moved and what he did after he got there, I decided to try to see what information I could track down about him. The two pieces of information that I had were his age (born, likely, in 1947) and the someone’s memory that the Quackenbushes had moved to the Pacific Northwest.

With a little research on Ancestry.com and Newspapers.com, I located Richard (born August 12, 1947) in Salem, Oregon. Fortunately, the Salem newspaper, the Capital Journal, is available on Newspapers.com; most of the information about him comes from that newspaper.

Richard and his family moved from Fayetteville to Salem because his father, a career army officer, was from there and wanted to live there after his retirement. Lt. Col. Roger W. Quackenbush served in the army for 27 years, beginning during World War II, and earned two silver stars and two bronze stars for valor.

Richard played for the North Salem High School Vikings basketball, football, and baseball teams. His name was regularly in the paper for exploits in those sports, especially baseball. For the football team, he played end, and in a 1964 action shot published in the local paper, he shows up as number 80. In another newspaper picture published in 1984, he is playing on the Viking’s basketball team.


He, of course, excelled in high school baseball and in the summer baseball leagues. He played third base and occasionally pitched. His heroics over the years are described in many different newspaper articles. For example, one article describes a grand slam home run he hit to win a high school game. Another tells of a no hitter he pitched, his team winning 20 – 0. 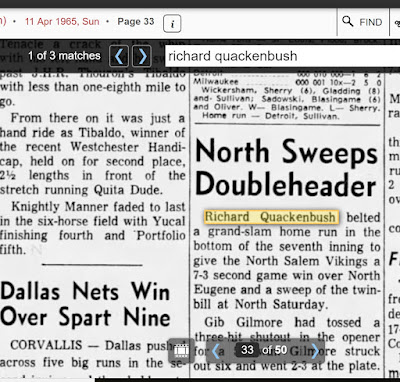 After graduating from high school in 1965, Richard attended Oregon State University and played baseball on its team as a third basemen The newspaper article in the Corvallis Gazette, dated August 2, 1965, that announced he would play OSU baseball noted, “Quackenbush has a cannon for an arm drawing ohs from the crowd every time he cuts loose” (it is not stated if he received a baseball scholarship). 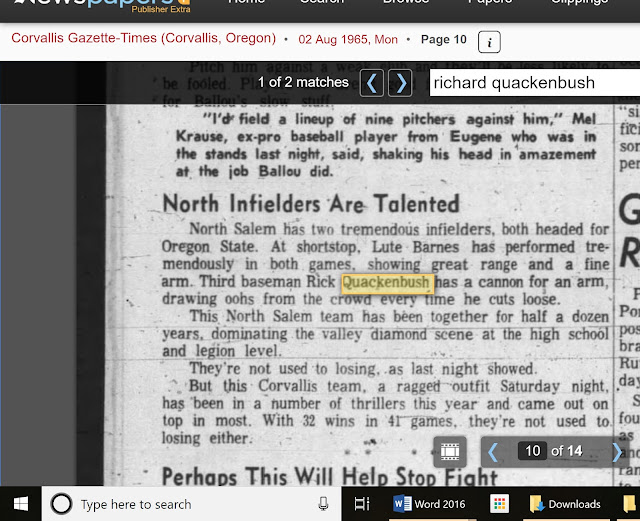 At OSU, Richard majored in business and technology. Having taken ROTC, he was commissioned as a armory officer in December, 1969 after his graduation, then returned to OSU in 1973 to study for an advanced degree in criminology. In 1975, he was married at a wedding in Briarcliff Manor, New York. An article describing the wedding said the couple was settling in Ossining, N.Y.

At some point after that, he returned to Salem and, it seems, taught special education there for many years. A 1996 picture shows him as a special education teacher in the Development Learning Center of Whiteacre Middle School in Keizer, Oregon, a small town just north of Salem. 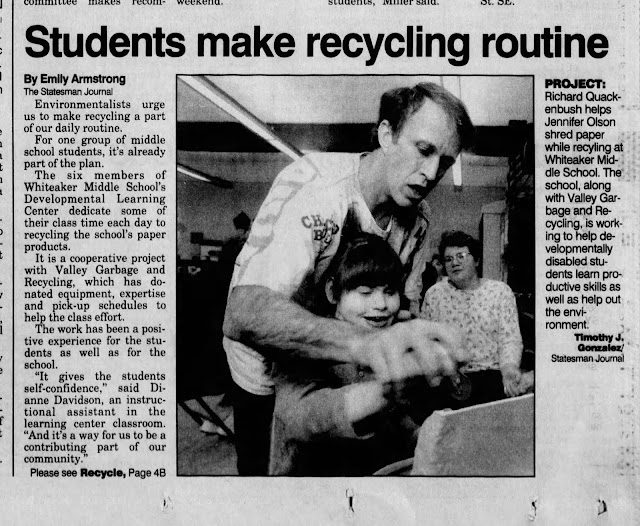 In 2003, the local newspaper reported he had made a hole in one at a nearby golf course.

This glimpse into the life of the former Fayetteville Little Leaguer, though incomplete, is enough to make us regret that he and his family did not stay around so that we could have played with him on different junior high and high school teams. Also the information reassures us that Richard has had a good life after leaving the city, full of accomplishments and successes. Of course to most of us in Fayetteville who knew him -- or knew of him -- Richard Quackenbush will always in our memories be a young boy in a Goff-McNair uniform throwing hard strikes and hitting long homers.