Probably my dad‘s best day on Saipan, where he was stationed as a soldier, came in 1945 when he got to pal around for a while with Fred Apostoli, the former middleweight boxing champion of the world. The thrill of meeting the former champ is apparent in pictures taken of them together, a satisfied look on my dad’s boyish face and his arm around the famous man’s muscular shoulders.


The thrill was real because Private First Class Coy Wayne Durning had been a boxing fan for as long as he could remember, way before he had been drafted into the army in September 1943 at the age of eighteen. Born in Cass Arkansas on April Fool’s Day, 1925, he and his large family (four brothers and five sisters) had lived there for a few years after his birth, then moved to Denning, another small place in Franklin County, before they settled on the outskirts of Fayetteville, a city where boxing was a popular spectator sport.
He had dropped out of school after the seventh grade, and in early 1943 had begun work as a baker’s helper at the Shipley Baking Company. This occupational choice turned out to be a good one for a young man not eager for combat. After he finished six weeks of basic training, he was assigned to the 273rd Quartermaster Bakery Company, keeping him off the front lines except for a few days during the battle for Saipan.

On April 4, 1944, four days after his nineteenth birthday, he boarded a ship in San Francisco crammed with soldiers heading to the Pacific War Theater where the fight against the Japanese was heating up. He would remain in the Pacific area for twenty-two months, returning home in late February 1946, five months after VJ Day.

He and the other 231 soldiers in the 273rd Bakery Company spent the rest of April, May, and early June in Hawaii training for their new secret mission. The company was attached to the Marine Corps, which made an assault on Saipan on June 15th. The bakery company waded ashore, under fire, ten days later. No company member was killed in the landing, but one, Joseph Tischinski, was hit by shrapnel on June 27th and died three days later. The fierce and deadly fighting lasted until July 9th. The battle annihilated a fanatical force of about 29,000 Japanese soldiers, with nearly 24,000 killed in battle and 5,000 who killed themselves when loss of the island became certain. U.S. forces numbered about 70,000 men, and it suffered 13,790 casualties, including 3,426 killed or missing.

The company began baking before the combat ended, and when it was over, its men worked three shifts, 24 hours a day to provide the marines, soldiers, seabees, and airmen on the island their daily bread. The Island became a staging area for the planes bombing Japan and supporting combat in nearby islands. The population of military personnel during the rest of the war was about 80,000 and they all needed to be fed.

Even after Saipan was under U.S. control, it was for many months a dangerous place because a small Japanese-led guerilla force was hiding in the island’s jungle and still conducting raids. Also, the Japanese periodically sent planes to bomb and strafe the island. Although those dangers were real,they likely bothered the bakers less than the island’s heat and mosquitoes. Their job required them to work long hours each day tending their hot ovens in this tropical climate. It was sweaty and grueling work, but the bakers didn’t complain much, knowing that the men they were feeding were putting lives on the line with every flight and every new battle.
The men of the 273rd lived in big tents, which on the steamy island were not much cooler than the tents where the bread, rolls, and pies were baked, and they each worked closely with a few other members of a platoon that operated its own ovens. As natural when people live and work closely together, sharing fear, hardships, and boredom, many became buddies, and my dad had several on Saipan. The pictures he sent back home show a few of them: Bud Bronson, Charlie Baber, Homer King, Tom Zolbe, Bill Scheppa, Thomas Taylor, Jay Brian, Pete Demeter, Joe Bennis, Don Larsen, and Marvin Williams.
Based on pictures taken in the first part of 1945 that he mailed back home, it appears that my dad’s best buddies were Bud Bronson, Charlie Baber, and Homer King. Bronson was a handsome young man with implausibly puffed up hair who had the healthy look of a California surfer. He was with my dad when he met Apostali. In contrast to blondish robust Bronson, Baber was thin, with a droopy look, like he had just emerged from hours in a coal mine. In one picture he is an unkempt sad sack type of soldier, but another shows him smiling, sharing a bunch of bananas with his friends.

Homer King was a stout Texan with a round face and thick hair. He came to visit my dad in 1954 when I was in the second grade. I remember him well because when I was riding around in the car with him and my dad, he insisted that I sip a beer.


My dad’s pictures with Apostoli were taken sometime from late March to the middle of June, 1945. Apostoli had come to Saipan (and other places in the Mariana Islands) with a troupe of athletes, mainly famous baseball players, to entertain the soldiers there. He had fought some exhibition matches in March, then when the other athletes left, he stayed to help with the military boxing programs in the islands. (My dad was not impressed with the exhibition match. He recalled, “They just danced around and leaned against each other for three rounds.”)


Apostoli was not only famous at the time, but popular. He was famous for several epic fights held in Madison Square Garden in which he fought for the middle weight boxing championship in 1937, won it in 1938, and lost it in 1939. His fights were, typically, extended brawls because Alfredo Apostoli was a gritty, hard training, never-back-down fighter, a descendant of Italian immigrants who had had a rough childhood in San Francisco, several years of which were spent in a Catholic orphanage. He had learned to box at a San Francisco YMCA and the city’s Olympic Club, supporting himself as an elevator operator in a posh hotel, earning him the nicknames “The Boxing Bellhop” and “The fighting bellhop of San Francisco.” He had great success as an amateur boxing, winning the Golden Gloves middleweight championship in 1933, then had turned pro in 1934.
Apostoli was popular with troops because he had volunteered to leave a safe position in the Navy (promoting physical training) to go into combat, and he had proven his bravery as a gunnery officer on a battleship in 1943. He had commanded a 40-mm gun on the USS Columbia, a light cruiser, earning a bronze star for his actions during multiple engagements with the enemy. Beyond his gunnery work, when his ship was in port, Apostoli was tireless in coaching Navy boxers and entertaining troops by fighting in exhibition matches. Also, it did not hurt his popularity that in late 1943, he married a comely professional golfer from San Francisco who was having some success on the lady’s tour.

At the end of 1943, Ring magazine – the bible of the boxing world – named Apostoli the 1943 Boxer of the Year for his contributions to the war effort. (Later, he was posthumously elected to the World Boxing Hall of Fame and the International Boxing Hall of Fame.) By the start of 1945, Apostoli had been assigned a post in Honolulu to train boxers, organize boxing matches, and fight exhibition matches. From there he made the March trip to the Marianas, and one Spring day the swarthy, broad-shouldered man was driving in a jeep around Saipan to meet soldiers there, and he happened upon Bronson and my dad. He shook their hands, told them a few stories and listened to theirs, posed for pictures with them, and was on his way. He left the navy in July, resuming civilian life in San Francisco.

When my dad returned to Fayetteville in late February, 1946, he went back to work at Shipley Baking company. Its plant was on Dickson street, which was located across the street from the D-Lux, an eatery where he had met fifteen-year-old waitress Bernice Couch in 1943, before he had been drafted into the army. He had kept in touch with her during his time in the army, sending her many pictures, including the ones showing him with Apostoli. She had been impressed with them and particularly liked a photo showing him shirtless with three buddies. She had passed It on to a sister or close friend after writing on the back, “The one with his shirt off is him. Cute ain’t he.” The written response: “Nice looking.” 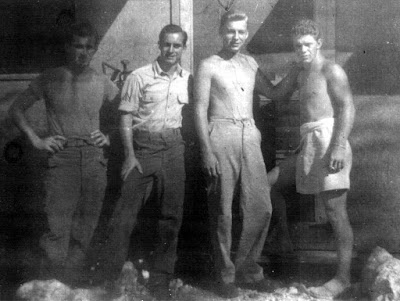 Eighteen-year-old Bernice married the “cute” twenty-two-year-old former soldier in August, 1946, even though she did not care much for his passion for the sport of boxing. During that month, Apostoli won his first professional fight since 1942, beating Pedro Jimenez by a TKO. In the last five months of 1946, Apostoli fought seven boxing matches, all in California, and won them. In 1947, he had seven more professional fights, winning six. His last professional boxing match was on December 1, 1948. After winning that fight, he retired from boxing at the age of 35 with a record of 61 wins (31 by knockout), 10 losses (4 by knockout) and 1 draw. After quiting boxing, he tried a few ventures in San Francisco, including a restaurant, then joined an ad agency as a sales manager. He was 60 years old when he died suddenly in November, 1973.

My dad followed Apostoli’s revived boxing career, listening to his matches when they were broadcast. He was disappointed by Apostoli’s retirement even though he knew he was washed up by that time. He remained a fan of boxing throughout his life. He would take me on Friday nights, before I entered elementary school, to stand in front of a building on East Center Street, a half block from the Washington County Court House, to watch a television in the window of the electric company that was tuned to the weekly fights. We and a few other fight fans would stand there in the dark to watch the televised action. Later, when we had our own television set, boxing was “can’t miss” fare.  He especially enjoyed watching middleweight boxing matches though he said he never saw a middle weight fighter who could hold a candle to Alfredo Apostoli.

Photos with Apostoli and Bronson 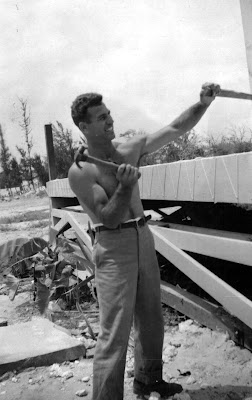 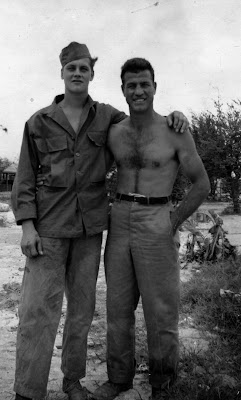 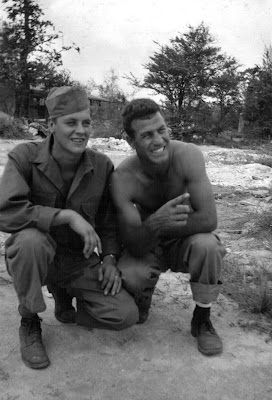 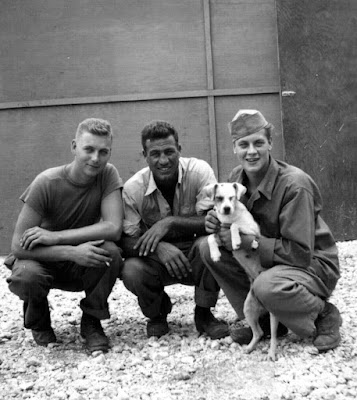 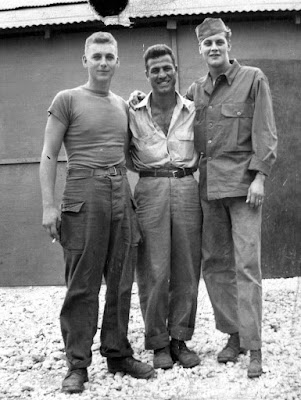 Other Photos with Bronson, Baber, and King

Note:  Some of the description is based on an interview of Carl Vusich, a fellow soldier in the 273rd Baker Company, See the interview at this link:  http://www.memory.loc.gov/diglib/vhp/story/loc.natlib.afc2001001.10130/

Also for a general description of the operation of Bakery Companies in the Pacific War Theater, see this link: http://tothosewhoserved.org/usa/ts/usatsq03/chapter09.html