Review of Spies of the Balkans by Alan Furst

Spies of the Balkans
By Alan Furst
Random House, 2010 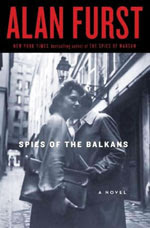 Costa Zannis is a super competent fixer for the head of the Salonika, Greece police department. He quietly and efficiently gets things done for his boss. He is also a man of extraordinary integrity and courage and action.

He will need all of his good traits because he will soon be tested.  Salonika, a coastal town on the Aegean Sea, is a short train ride from Bulgaria, Serbia, and Italian-controlled Albania. It is 1940. War-driven chaos is about to break loose in the Balkans and Greece. This town of intrigue is about to be drawn into the furious violence of WWII.

Mussolini has ineffectually attacked Greece in his search of glory; with his failure, the Germans will come next. Neighboring Bulgaria will yield to German demands to become allies, and the Wehrmacht will quickly sweep through Bulgaria and easily fight its way through weak Yugoslavia to reach Greece. Most certainly, the war is coming to Salonika.

Zannis is a Greek patriot who will help resist the invaders. Before they come, he agrees to help a German woman in Berlin, the Jewish wife of a high ranking army officer, arrange for the transportation of several Jews from Berlin to Salonika, where they will be able to continue to safety in Turkey and other locations. He also assists British intelligence by helping an important scientist escape from Nazi-controlled Paris. The Germans are looking for him.

In this satisfying novel, Furst again creates a rich historical backdrop for events that test his characters, and he captures the atmosphere of people caught up in desperate times beyond their control. The strong plot is amplified by evocative descriptions of a time and place that stir the imagination. This book is not his best, but is good enough to make you want to read it from beginning to end as fast as you can. It seems that Furst, like Costa Zannis, never disappoints.
Posted by Dan Durning at 10:13 AM