Looking through a large pile of old clippings, I found a picture of the 1960-1961 Hillcrest Junior High (Fayetteville, Arkansas) basketball team, and one face in the picture surprised me.  It was David Mullins, son of the man who was at the time president of the University of Arkansas. 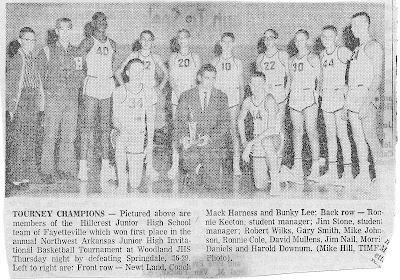 In this picture, David is in the back row, fourth from the right, standing between Ronnie Cole and Jim Nail.  The picture was taken after the Hillcrest team had won the annual Northwest Arkansas Junior High Invitational Basketball Tournament.

I didn't remember that David was on that team, though I recalled that he attended Hillcrest. He was in the class before mine.

David spent some time at Fayetteville High School (FHS).  We sat next to each other one year in Mrs. Andrews' Latin class.  I think -- but am not sure -- that David had attended a private school in the East for some years, but returned to finish up at FHS.  Anyway, I recall that he kept me amused with his drollery, and I tried to do the same for him.  Mrs. Andrews was a hoot, but the subject matter was, literally -- and I literally mean literally -- dead.

David got a Ph.D. from MIT and taught at the Harvard Business School.  He was an assistant Secretary of the Treasury during the Bush-the-First years.  In about 1986 or 1987, one of my public policy students at Duke University had an internship at the Treasury Department and did some very enjoyable work for him.  In 1990, he was appointed to the Federal Reserve Board of Governors.

I recall reading somewhere that at Harvard David was famed for writing all of his lecture notes in a spiral, with tiny letters, on a small scrap of paper.

Among his former classmates at Hillcrest and FHS, David has distinguished himself by having his very own Wikipedia entry.  See:  http://en.wikipedia.org/wiki/David_W._Mullins,_Jr.

David's career is proof that a good jump shot is not a requirement for success as an economist.
Posted by Dan Durning at 7:43 AM