In the past few months, five new water-view houses have been built in Birch Bay, Washington. These houses continue the trend of building big on small lots. Three of the houses have conventional designs. The other two have a more boxy modern style.  One is distinctive in its design with widespread use of glass and multi-level decks.

The ocean front house is a one-story structure built next to the Jackson Road Public Access.  It is designed and painted to be compatible with an adjacent two-story house that was built and occupied within the last year or so. These two houses replace a mobile home that was on the lot. This new house appears to be occupied, but is still receiving some finishing touches.

Across Birch Bay Drive from this ocean-front property is the most distinctive and impressive of the recent new houses.  This new modern structure has three floors with huge windows and multiple, large decks.  The view from the street shows an attractive interior with an open design and high ceilings. The exterior is painted a light color, similar to the newer houses across the street and the neighboring houses.  Terrell Creek runs behind the house.  This house replaced an old mobile home. 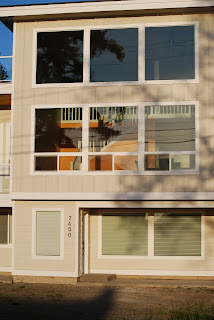 It appears this house has been completed, but is not occupied.  It does not have a garage, so parking will be in front.

The three other new houses are across Terrell Creek to the north of Jackson Road. One, occupied very recently, is on Woolridge Avenue, just up from Jackson Road.  Another house, a huge one, is being completed further up Woolridge.  It has a steep driveway off Woolridge, but the house fronts on Sunset Drive. The third house was built on a vacant lot on Morrison Avenue. It lies between the road and Terrell Creek.

The Woolridge Street house nearest Jackson Road is a two-story unit with a garage occupying part of the lower floor. It is painted a dark color, and it is landscaped with rocks and boulders.  Its second floor has a large deck with an ocean view.    It was built on a vacant lot.


The structure being constructed on the hill between Woolridge Avenue and Sunset Drive is three stories with two huge decks.  The bottom floor appears to be a garage. The driveway access is a steep drive from Woolridge.  Several trees were removed to build the house and extensive excavation was done on the hillside. Some of the remaining trees on the hill appear to be in jeopardy because of root destruction caused by the construction. A moldy old bus was removed from the site prior to the construction. 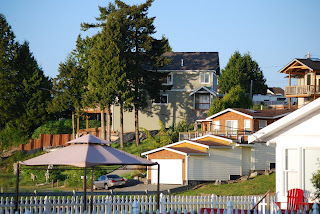 The house is painted a light green and has few windows, except at the at the back where the decks are located.

The final new house, which is now occupied, was built on an empty lot on Morrison Avenue.  It is a two-story structure located between the street and Terrell Creek.  A part of the bottom floor is a garage.  The house has few windows, except to the west.  It is painted a dark color.
These single family housing structures are all substantial investments made in Birch Bay during a difficult economic time. These houses, plus many renovations that were done in the past year, continue to increase and upgrade the housing stock.
Posted by Dan Durning at 10:26 AM