FORTY YEARS AGO, in October 1972, I was driving around the state of Arkansas in the Climermobile, a large motor home whose use had been donated to the “Jerry Climer for Secretary of State” campaign by one of his supporters.  Jerry had hired me to work for his campaign against incumbent Kelly Bryant.  Jerry lost, but the campaign was an adventure.

The 1972 Election in Arkansas

The 1972 election was the first in the post-Rockefeller era for state Republicans. Before 1964, the party had offered only hapless, futile opposition to the dominant Democratic Party. However, by 1964, Winthrop Rockefeller and his supporters had taken control of the party, and that year WR ran for governor against Orval Faubus, the long-time incumbent.  Losing to Orval Faubus in 1964, WR ran again in 1966, beating Jim Johnson to become the first Republican governor since Reconstruction. He was re-elected in 1968, then lost to Dale Bumpers in 1970. In all of these campaigns, WR and other Republican candidates for state-wide office had plenty of resources to be competitive. 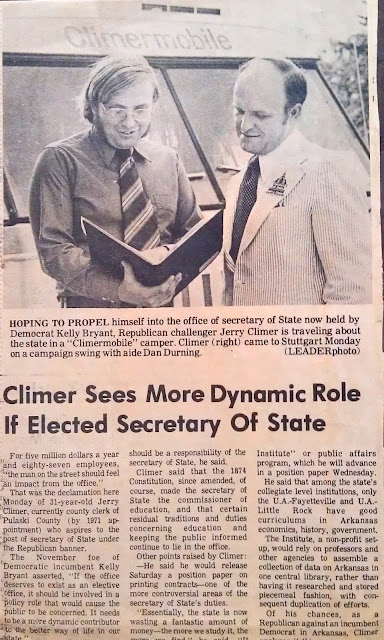 Following the 1970 election, the Republican Party had ignored Rockefeller’s recommendation to elect William T. Kelly to be chairman of the Party, voting for Charles Bernard, the unsuccessful Republican Senate candidate in 1968, instead. WR, who supported Kelly and apparently was not too fond of Bernard, was not pleased.

Without WR on the ballot and lacking the funding of the previous four elections, the 1972 election was a test of the strength of the state’s two-party system. The Republican Party recruited four credible candidates for state office: Len Blaylock (governor), Ken Coon (lt. governor), Ed Bethune (attorney general), and Jerry Climer (secretary of state). Also, Wayne Babbitt was selected as the Party’s candidate for the Senate. In addition, of course, that year Richard Nixon was the Republican candidate for president.

WR (who had pancreatic cancer that would kill him in February 1973) limited his contributions for the 1972 campaigns to a fixed amount given to the Republican Party, and the Party and its candidates were expected to raise additional funds to have enough to be competitive. The lavish campaign spending of the previous eight years had ended.

Going to work for Jerry Climer

I had not been following state politics too closely since the 1970 election when Bumpers had crushed Rockefeller. I had been finished up my studies, then spent a miserable six weeks at an ROTC training camp.  Following that, I went to Vienna for a year.
Arriving back in Arkansas in June 1972, I had six months to occupy before reporting to a training camp for artillery officers. I was happy to read that Jerry Climer was running for secretary of state. Apparently, he had made a good impression as Pulaski County Clerk after being appointed by WR to that position in late 1970 to fill a vacancy. I had known Jerry at the University of Arkansas and thought highly of him, viewing  him as a serious guy, very intelligent and ambitious.

Visiting Little Rock, I gave him a call and found out that he was looking for a campaign assistant.  I quickly signed on. The adventure began.

I viewed the job as much more than a way to occupy a few months and get a paycheck:  I believed strongly that Jerry would make an excellent secretary of state and would be far superior to the incumbent. As required when working in any serious political campaign, I threw myself into the job and spent four months absorbed in the task of getting my candidate elected to office.

The chair of Climer’s campaign was Phyllis McGinley (if I remember correctly), a nice middle-aged woman who was dedicated to Jerry’s candidacy.  She worked with him to create his schedule, managed the budget, directed volunteers, and operated the campaign headquarters on Capitol Avenue in Little Rock. She initially viewed me with some suspicion, probably because I had longish hair and mutton chops. She was not sure it was wise to have hippy- looking guy traveling with the candidate. Fortunately, we got along and she warmed to my involvement in the campaign. 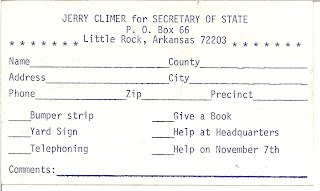 My job was to travel with the candidate in the Climermobile, help write press releases and other campaign material, assist with correspondence, and help out with ideas to advance the campaign. Most of the travel was done in the large motor home which enabled us to avoid spending money on hotels and provided us with a moving bill board. We put about 14,000 miles on it during the months of driving around the state.

The actual days spent campaigning are a bit of a blur.  A typical day included driving, shaking hands, speaking, writing, calling, and schmoozing. We did our best to generate stories for both newspapers and radio. We were keen to see what was being published in newspapers about Climer and Bryant, and to hear what was broadcast on radio.  So we monitored both closely.  The Republican Party had hired a clipping service that passed clippings about the race to us each week. When driving, we kept tuned to local stations to hear what they were saying.

Free media was important because the campaign budget was quite limited, with only a small amount of funds for paid television and newspaper advertising. Climer’s biggest challenge was to increase his name recognition outside of Pulaski County, and without a substantial media budget, that was almost impossible.

Climer gave it his best, and I was impressed with his campaign skills and his dedication to the task. Though I am moderately cynical by nature, Climer was not. He seemed driven by the conviction that he could do a much better job as secretary of state than the man he was running against. Though the odds were against him winning the election, Climer spent time near the end the campaign discussing with me what steps he should take immediately after taking office to improve its operations.

I am not sure how much of an asset I was to Climer. He was understandably reluctant to have me too visible when he was out shaking hands. In 1972, longish hair apparently put off small town voters. In Harrison, the chairman of the county party organization pointedly invited me to stay in the Climermobile when Jerry went to meet with Party supporters to make a brief speech.

What I did well, I think, was write press releases and position papers that were used to get campaign coverage by newspapers and other media.  The journalism courses that I took at the University of Arkansas paid off when I was doing this work.

The Lost Election and Its Aftermath

Of course, Climer lost, as did all of the other Republican candidates for state-wide office in 1972. While he received only 40.6 percent of the total vote, he got 62.4 percent of the vote in Pulaski County. Also, polls showed that he received a majority of the votes of voters with post-graduate degrees. His name recognition never reached 50 percent.

Probably unwisely, I wrote an article the following year about the Climer campaign for a local alternative newspaper in Little Rock, the Arkansas Advocate, in which I said nasty things about Kelly Bryant, his wife, Nixon’s campaign in Arkansas, the Arkansas Gazette, the AFL-CIO, state radio stations, state newspapers, and voters in general. The article was a bit sophomoric and ill-advised, but still provides a perspective of what it was like to campaign in Arkansas in 1972. It can be found here: http://www.scribd.com/doc/110446291/The-Climer-Campaign-The-Crusade-Nobody-Noticed

I mentioned in this article my disappointment that the Arkansas Gazette did not publish a series of investigative articles on the malfeasance of the Secretary of State's office until after the election. The reporter who wrote those articles called to yell at me and suggest he was going to sue me. A few weeks later, when I got an entry level job at the Arkansas Department of Planning, he tried to sabotage me by writing a Gazette story about me getting a state job. The article prompted a call from the governor’s office to Charles Crow, the director of the department. Fortunately, he apparently convinced the caller that my academic credentials were sufficient to justify hiring me for this $9,000 a year entry level position.

Jerry Climer never again ran for office, but had a stellar career in Republican-related jobs. After completing his term as Pulaski County Clerk, he worked as the chief legislative assistant to Congressman Tom Coleman (R-MO), and then was executive assistant to Ed Bethune for six years after he was elected to the House of Representatives in 1978.  From 1985 to 1990, Climer was on the leadership staff of Congressman Guy Vander Jagt (R-MI).  (See http://en.wikipedia.org/wiki/Jerry_Climer)

Climer helped set up and lead two non-profit organizations that worked with Republicans in Congress. The first, the Congressional Institute, has sponsored travel and retreats for Republican Representatives and Senators, but its website (http://conginst.org/) indicates that it has a broader bipartisan mission:

Founded in 1987, the Congressional Institute is a not-for-profit corporation dedicated to helping Members of Congress better serve their constituents and helping their constituents better understand the operations of the national legislature. The Institute sponsors major conferences for the benefit of Members of the U.S. Congress as well as a number of smaller gatherings, all devoted to an examination of important policy issues and strategic planning. The Institute also conducts important research projects consistent with its mission, develops resources such as a House Floor Procedures Manual and sponsors Oxford-style bipartisan Congressional debates.

The Public Governance Institute is a policy training and research organization. According to its website (http://www.publicgov.org/): "The Public Governance Institute is a research, education and training group. Founded in 2001, the Institute assists public leaders and institutions in their effort to lead public-sector change." This institute, at this point, does not appear to be actively involved in projects -- or at least its website does not show much activity.

Climer retired in 2007 and lives in Edenton, North Carolina. He was co-author of a book, Surviving Inside Congress that was published in 2009, with a second edition in 2011.  It is available both as a regular book and in a kindle edition (http://www.amazon.com/Surviving-Inside-Congress-ebook/dp/B005E0UTUC).

I saw Jerry only a couple of times in passing after the 1972 campaign.