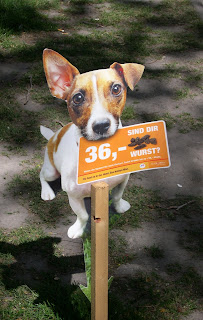 The first sign appears in most of the green areas around central Vienna. It shows a dog with a piece of paper in its mouth. The paper informs everyone that the fine for not cleaning up after your dog is 36 Euro. Included is a picture of some dog residue, surrounded by a question: "Are you sausage (wurst)?"

The use of the word "wurst" is a joke on a couple of levels. First, it is clear that the black blobs are not wurst and should be cleaned up. Second, there is a phrase in German, "Es ist mir wurst," ("it is sausage to me") which means that it does not make a difference to me. So, the question is also, does it not make a difference to you? (At least that is how I understand it, but my German is not too great.) 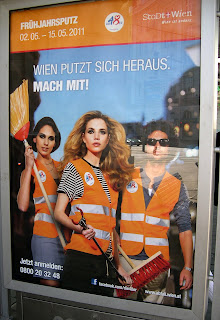 Last is a picture of a car parked across the street from my apartment. After seeing it, I chose to believe that the city of Vienna had required truck owners to label the different parts of their trucks so that pedestrians would not be confused about which part of it is the front and which part is the back. Of course, the real explanation is much simplier and less fun. It is inexplicable why did I found this truck so funny. 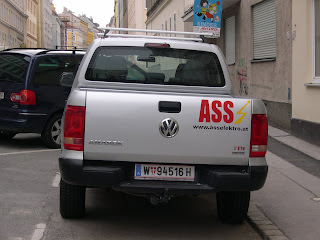