The Search for Great-Grandpa Sobotka 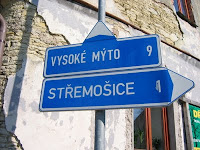 Last week, Jim Lynch of Little Rock went searching East Bohemia for Josef Sobotka, his great grandfather. Sobotka, a butcher, left the village of Stremosice, then a Bohemian village in Hapsburg Austria, in 1867 to emigrate to the United States.  He ended up settling in Missouri, and the Sobotka’s multiplied.  His many descendants are now spread across the United States.

Jim’s mother was one of Josef’s descendants, and Jim has numerous aunts, uncles, first cousins, second cousins, and others who are related to him through Josef.  None of them has visited the remote village in which Josef grew up.  Jim decided to be the first.

Spending the month of April in Vienna, Austria, Jim saw on Google maps that Stremosice, a village of about 180 people, lies roughly 200 miles to the north of Vienna in the Czech Republic.  He enlisted me to help with the trip.  Jim was my roommate at the University of Arkansas about forty years ago, and I promised DeDe, his wife, that I would look out for him during his time in Austria.  So, I signed on for the adventure.

We first thought about renting a car in Vienna and driving up to the village. I was not too excited about the prospect of driving that far on unknown roads.  A visit to Vienna’s West Train Station yielded some good news:  an express train connecting Vienna with Prague stops in Pardubice, the capital of the region in which Stremosice is located.  The train ride to Pardubice takes only about three hours -- faster than driving.  Even better, the distance from Pardubice to the village of Stremosice is only about 20 miles.

So, we bought tickets for the train from Vienna to Pardubice, and we booked a hotel and car rental in that city.  When we took off on Wednesday (April 20), it was a perfect day with high blue skies and spring temperatures in the low 70s.  Modern European trains are a comfortable form of transportation, and this express train was no exception.  We headed north through some flat agricultural land and observed the scattered hills as the train pulled into Pardubice, a city of about 90,000 people.

After getting some Koruna out of an ATM, we got a taxicab to Hotel Euro, a modern hotel located on the edge of the city’s old town.  A few minutes later, we were in a rented car heading south.  We first had to figure out how to get to highway 37.  Fortunately, the directional signs were clear, and we were soon on a well paved two-lane road heading to the destination.  After a few miles on that road, we turned onto some narrower two-lane roads, going through village after village, each with its weathered old church and yapping dogs.  No road signs pointed us to our destination.

The drive took us through rolling hills, with green vegetation framed by the dark blue, cloudless sky.  Large swaths of the land were covered with brilliant yellow rape plants (aka canola) grown in this part of the world.  Dogwoods and cherry trees provided scattered pink and white decoration.

After a couple of wrong turns (as navigator, I attribute the misdirection to errors in the map), we were near Stremosice, but still had seen no signs pointing the way.  The roads were unnumbered and barely wide enough for two vehicles to pass each other.  Finally, we spotted a sign:  Stremosice 1 km.  Cheers arose.  After about five minutes, we realized that we had a made a wrong turn on the cusp of the village and had gone up a hill to a neighboring city.  We backtracked and finally arrived.

We found a village of neat, well-ordered houses lying on a moderately steep slope.  After a glance around Stremosice, we drove up the hill to check out a highly visible yellow monument at the top and view the village from the higher ground. The monument, apparently religious, has no writing indicating when it was erected or what it commemorates.  The land at the top of the hill is tilled and flat.  About a half-mile from the yellow monument is the small city of Repniky.
Looking at Stremosice from the high vantage point, we were hoping to spot a cemetery in the village.  We saw a sweeping valley with some scattered settlements and a meandering creek, but no cemeteries.
Jim spotted two teenagers with some distinctive urban attire sitting nearby.  He approached them to ask if either of them spoke English.  They said they spoke a little English, so Jim asked them if Stremosice has a cemetery.  They did not understand.  He asked again, with some gestures, and they still did not understand.  So, I intervened and said:  “Dead people” and pointed to the ground.  After some giggling, one of them told us there there was a cemetery one kilometer away in Repniky.
A visit to that cemetery, which surrounded an old church, yielded six “Rodina Sobotkova” (Family of Sobotka)  tombstones, which were likely erected within the past fifty years.  They had no names indicating who is buried in the plots nor dates of birth and death.  Likely, the tombstones show the burial locations of six different Sobotka families, with more than one person buried in each of the plots.

The cemetery had many old unmarked graves.  Other members of the Sobotka family may be buried in this cemetery, but their burial sites can no longer be identified.

Going back to the village of Stremosice, Jim saw a older guy doing some yard work.  The man did not speak English, but said he spoke German.  He called over a neighbor kid, about twelve, who is studying English.  Jim asked me to assist with translation from German (it turns out that the guy spoke very little German).  With some labored translation, Jim found out that this gentleman is 60 years old and has lived in Stremosice his whole life.  He told Jim that there were no longer any Sobotkas living in the village, but that two houses, known as the Sobotka houses, had been located across the street from where we were standing.  They had been torn down about 25 years ago.

Exploring the village a bit, we found an old statute and an old water pump, both of which could have been in existence when Jim’s great-great grandfather had lived in the village.  Also, we admired the the tiny, but colorful village church, which may have been at that location for 150 years.  At the church is a monument celebrating something that Emperor Franz Joseph did in the early 20th century.  The inscription is in Czech, so I am not sure what is being commemorated.
Jim found another friendly local resident to talk to, again with the help of the boy studying English.  This man, six-five years old and a native of the city, confirmed the information provided by the first man.

We walked around the village -- which has no stores or businesses -- taking more pictures and getting a feel for the place. We spotted an old house next to the lot where the Sobotka houses had been located and surmised that it was the same style as the houses that had been built next to it.

After an hour or so, we drove through the nearby picturesque village of Bily Tun, built along a creek a short walk from Stremosice.  Then, we went to another nearby city, Luze, a little over a mile from Stremosice, which has a large cemetery and a huge old church.  Jim found one Sobotka family monument at the cemetery.
With that, the sun was getting ready to set, so we began the journey back to Pardubice.  The trip back was fast and comparatively easy.

When setting out on this trip-- or one like it, you can have hope that you will encounter a long lost relative who can tell you what happened during the past 140 years to the Sobotkas who had remained in Stremosice.  Perhaps they can explain what happened to Josef’s parents, who both had died on the same day in 1848.

Absent a long lost relative, the next best thing would be to find a tree in which Josef had carved his name, or a building in which he had lived or worked.  Even better would be some local lore about how Josef had been a revolutionary who had left Stemosice to escape the Hapsburg’s secret police, or had been the town drunk who had been ordered to leave because of his bad behavior. Maybe he had been known as the intellectual butcher, who read the densest books between his stints at the abattoir.

Probably the most likely outcome of visits such as this is less dramatic than finding a relative or hearing 140-year-old stories about your relatives. Time eliminates those who remember our ancestors and the details of their lives, then it destroys the possessions they left behind and renders their relics incomprehensible.  Even written accounts and some inherited artifacts from our ancestors, most of us can only hope to catch glimpses of the lives they led.

Jim professed to be happy with the results of his search .  As the first of Josef Sobotka’s descendants to return to the old village from which he came, Jim can report to the others about the village where his great grandfather had grown up and had decided to leave.  He can tell his  impressions of both its beauty and isolation.  He can better understand Josef, whose eyes looked out over a fertile, gentle land as he decided a better future awaited him elsewhere.


More pictures of the trip are available at this site: https://picasaweb.google.com/dan.birchbay/TripToStremosice#